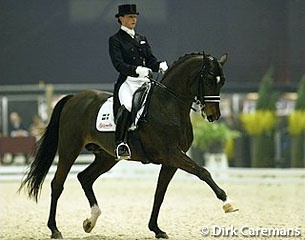 Helena Larson and Minna Telde have been announced to be the recipients of the final two wilds cards for the 2003 World Cup Dressage Finals in Goteborg, Sweden, March 27-30, 2003.

The organization of the World Cup Dressage Finals 2003 had the liberty of distributing three wild cards in a field of currently active international competitors. It was already known that American Debbie McDonald had received the first wild card for the World Cup Dressage Finals. The other two have now been given to two Swedish dressage riders, namely Helena Larson and Minna Telde.

This final, patriottic distribution of wild cards was decided at the CDI-W in 's Hertogenbosch, The Netherlands, where Marlies van Baalen and Heike Kemmer dominated the World Cup qualifying classes.