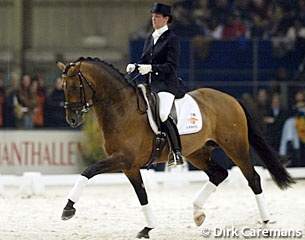 At the 2003 KWPN Stallion Licensing, the 2002-2003 NHS/KWPN Stallion Competition Finals were contested. In order to decide the winner of the Divoza Cup, four qualifier competitions took place

during the winter show season, and a special finals was organized during the Stallion Licensing in the Brabanthallen in 's Hertogenbosch, The Netherlands.

Winner of the Divoza Cup 2003 at First Level is Hilltop's Rousseau, ridden by Nicolet Van Lierop. With 254 points in total gathered at the qualifiers and a winner score of 86 points at the Finals, Rousseau (Ferro x Roemer) had a grand victory in Den Bosch with 340 points in total. Reserve champion at first level is Rhodium (Ferro x Ramiro) under Hans Peter Minderhout. With 240 points in the qualifier and 78 points in the finals, Rhodium had a total of 318,5 which put him second. Coby van Baalen's student Anke ter Beek became third aboard Riant, a Jazz x Julia Mariner xx offspring who was actually first trained by Marlies van Baalen, then by Delphine Meiresonne and then by Anky ter Beek. Ter Beek scored 79 points in the finals, making a better performance than Rhodium, but only had a total of 306 points overall which placed them third. Radar (Cocktail x Le Mexico) and Anke ter Beek were fourth, Redford (Krack C x Ferro) and Edward Gal came in fifth. Ro-Lex (Montecristo x Winckenburg) and Madeleine Vrees finished sixth overall. 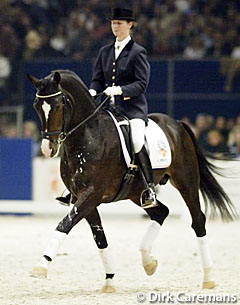 The finals for the Second level horses were only occupied by two horses. The duel was between Paddox (Ferro x Darwin) and Polansky (Kostolany x Donnerhall) and was won by Paddox. He scored 82 points in the final and had an overall score of 308,5 points, making him and his rider Marijke Folmer the 2003 Champions. Gerdine Maree and Polansky scored 73 points in the finals and had a total of 298 points.