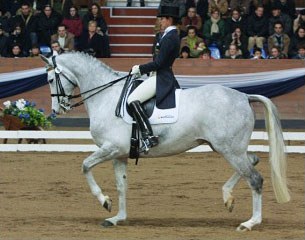 San Patrignano Press Release -- The repetition of the number four seems to be the rule adopted by the strong German team, at San Patrignano for the Italian Dressage World Cup qualifier

Report of an announced victory for Monica Theodorescu, an athlete able to gain from '98 until today, five team golden medals including World Championships, European Championships and Olympic games. She reached the top of the podium with an impeccable test, perfectly performed on her Renaissance Fleur, scoring the very high percentage of 77,69%. A score that showed to be unattainable for her team fellow women: Heike Kemmer obtained the nearest score with her Albano, 74,64%, while the experienced Isabelle Werth placed third scoring 74,36% on Antony Frh, which substitutes her former, outstanding horse, Gigolò. On this horse Ms. Wert wrote the last 10 years' history of this discipline: 12 team golden medals including Olympic Games and European Championships and golden individual medals both at Atlanta '96 and to two World Championships.

The German supremacy has been interrupted by the Swiss Christian Plage, riding Regent, 71,62%. Meanwhile the last German rider, Gina Cappellmann on Amando, came fifth with 71,54%. Theodorescu declared herself completely satisfied with her result and stressed her mare's good performance: "Reneissance is getting better and better and I didn't expect myself she could express herself at such top level. After this performance my goal for this season is to reach the final of the word cup where I hope to achieve a good result".

San Patrignano's meeting has, by the way, quite changed the look of the Dressage World Cup standings. The Dutch lady rider Anky van Gruningen still retains the first place with her 57 points but soon after her the German lady riders Theodorescu and Cappellmann elbowed their way to the top, reaching second and third position respectively with 52 and 51 points. A quick jump forward was scored by Mrs. Kemmer too, who thanks to today's result reached the Swiss Ramsaier on the fifth ranking of the World Cup. 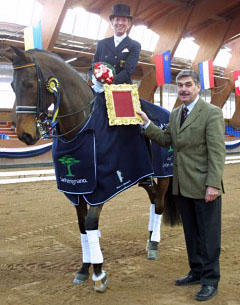 All technical forecasts have been completely fulfilled on the first day of dressage FEI World Cup at San Patrignano. And indeed the German lady riders - who really triumphed with 4 athletes on the five top ranks in the afternoon test (qualifier for the Kur 1 scheduled for tomorrow morning) - staked a firm claim on the competition final standings. The first place was taken by Monica Theodorescu, team gold medal in 1990, who on Renaissance Fleur scored 70,76% preceding, respectively the fellow-countrywomen, Isabelle Werth on Anthony FHR (70,24%) and Heike Kemmer on Albano (69,72%). The only one to somehow interrupt the German triumph was the Swiss Christian Plage, who on Regent with a score of 68.72% could precede the German Gina Capellmann on Amando (66,68%).

The German dressage school had already, by the way, manifested its superiority in the challenge opening test: in the morning in fact the Prix St. Georg, which the athletes tackled on ttheir less expert horses , had been easily won by Heike Kemmer who on Ferragamo preceded respectively the Irish Anna Nerveldt on Hera and the Dutch Karen Njivelt on Maestro. Unluckily the Italians couldn't quality for tomorrow Grand Prix. The best among them, Stefano Blasi, could only achieve the 16th position but it must be said that Italy at the moment pays its due for the absence of two of our top athlets: Laura Conz and Pia Laus, actually the only ones capable to really compete with the best pairs in dressage all over the world:

After winning the test Isabelle Werth, two times world champion and gold medal at the olympic games in Atlanta, said she was utterly impressed with what she had seen at San Patrignano: yesterday I took a long visit of the community. I came in touch with its young people and I was struck by their courtesy, their helpfulness, the full commitment they put in all they do. Besides the equestrian facilities are good and I believe that the choice to host here the 2005 EUCH-S has been a good one. Pairing sport and solidarity might be a good tool to spread the social message of San Patrignano. By mental attitude sportsmen put goals to themselves. Therefore we feel solidarity with the young guests here: in that they have precise aims too and commit themselves completely to fulfil them.

At the end of the competition Cesare Croce, President of the Italian Equestrian Federation, has underlined the friendship and collaboration joining San Patrignano and the Federation: "The fellowship with San Patrignano has proceeding and growing since many years and our sports is deeply committed to support the message against drugs and social out-casting San Patrignano brings forth. And in 2005 we will hold an European Showjumping Championships in a community. There are no precedent in any other sports". Giacomo Muccioli is fully satisfied for the success of the event and is deeply impressed by the technical niveau of the German Dressage. "The four German lady riders have proved to be a step further the other competitors. I am really pleased that San Patrignano could provide the Italian fan of this discipline with the chance to see them live. Above all, since this year is the 25th anniversary of the community, we are particularly happy that we opened it with such a successful event".