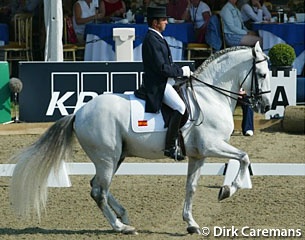 An unfortunate incident took place at the Real Escuele in Jerez de la Frontera, Spain, where the the Andalusian stallion Distinguido of the Royal Andalusian Riding School has been abused at the hands of his groom.

Distinguido was kicked in the groin by his groom with such force that he had to be operated and as a consequence lost one of his testicles. The reason given by the groom for this brutal attack was that the horse cornered him in the stall and bit him. While we accept that unfortunately it is in human's nature to sometimes react and hit back in such incidences, the target of our anger is usually confined to the fore regions - head, neck or even belly. However, to kick a horse in the groin is a premeditated act - despicable and vile - and should be forcibly condemned.

Distinguido is one of the top Andalusian Horses of Spain in Classical Dressage, ridden by Ignacio Rambla, and a likely candidate for the next Olympics.