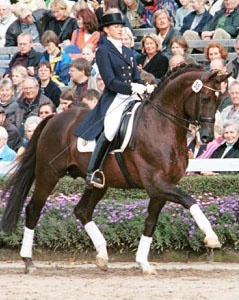 In the past, Eurodressage has often put horses ridden by Marlies van Baalen in the spotlight. It's not a coincidence that this young Dutch rider draws so much press attention.

Thanks to her trainer and benefactor Johann Hinnemann, Marlies van Baalen is the second young rider, including Ellen Schulten Baumer, who has easy access to upper level dressage horses, as well as talented youngsters.

While this gorgeous combination won the 2000 Dutch Championships at Prix St Georges level, the new transition to Grand Prix is a little harder. At the CDI Frankfurt, the pair finished 15th in the Grand Prix with 62.68% and in the Freestyle with 63.75%. 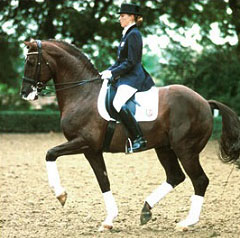 "The explanation is quite easy," Van Baalen said. "I'm devoting more time to the training of Idocus for the European competitions. I should have started Fidermark in some regional Grand Prix classes in Germany or Holland first, before showing him Grand Prix at a big CDI."

Fidermark was born in 1992 and bred by W.Hage from Rüthen-Hemmernwon, Germany. He was the reserve champion at the licensing and went on to win his stallion performance test. In 1996, he won the Bundeschampionate under Michael Farwick, and as an eight-year-old he successfully participated in the Nürnberger Burgpokal Finals.