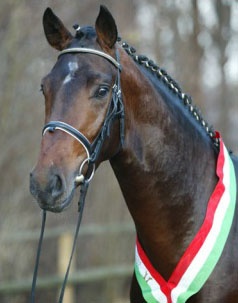 Rosencharmeur was the best young stallion of the 2002 lot. Bred by Michael Schulte from Batenbrock, Germany, prepared for the licensing by Thomas Koldehoff from Vechta and owned by Gestüt Domselshof in Kerken, Germany, Rosencharmeur charmed the judges of approval commission with his elasticity and top conformation. Rosencharmeur is by Rosenkavalier out of Melika (by Mon Cheri). 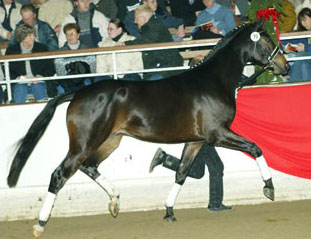 The dark bay stallion is bred and raised by Horst Widdig from Neunkirchen, Germany, and the famous stallion station St Ludwig purchased him for their breeding programme.

Many stallions were sold after the licensing, and the most expensive one was the superbly trotting Lord of Loxley, a Lord Sinclair x Landadel get with great dressage potential. The Swiss Balz Wolfensberger was willing to pay top money for the horse. Just as with his other mount Weltfurst, Wolfensberger keeps his horses in training with Sabine Rueben in Aachen, Germany.