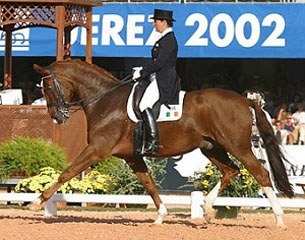 At the Munich Indoors CDI competition, Irish Anna Merveldt Steffens and her chestnut mount Fosbury conquered in the Grand Prix Special, scoring 67.30%. Anna returned to the international circuit in May 2000

after taking a year out due to the arrival of her young son Philip.

She placed second in the Grand Prix Special at the Monza CDI*** in Italy on her first outing back and went on to win the Bavarian Championships in July 2000. She was awarded the Irish Field Dressage Rider of the year award for 2000 and again in 2001.

Her 2001 season was initially disrupted by the foot and mouth disease restrictions and this meant she had only one international outing prior to the European Dressage Championships in Verden, Germany in early August. Despite this she qualified for the individual final (top 15) and placed 14th individually with Darius 213.

At the CDI in Stadl Paura, Austria she introduced a new horse in her string, Fosbury 2 owned by her trainer Johann Hinnemann, to international competition for the first time with outstanding results. This new partnership opened the show by placing 4th in the Grand Prix and automatically qualified for the Grand Prix Special on the final day of the show. Fosbury and Anna performed brilliantly to place 2nd in the Grand Prix Special an outstanding debut for a new horse at this level. She was a member of the Irish team at the World Equestrian Games in Jerez (2002) and individually placed 33rd.