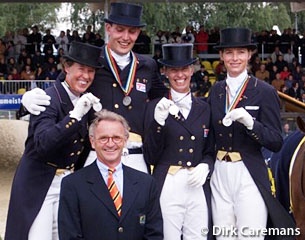 It's been only half a year since his abrupt resignation as chef d'equipe of the Dutch Dressage team, or Jurgen Koschel accepted the position as team coach of the Swiss dressage riders.

Koschel motivated his resignation as Dutch chef d'equipe that his health forced him to take it more easily, but apparantly Koschel has recouperated so fast that he can get back to work now for the Swiss.

Born in Berlin, the 56-year old Koschel has a training facility of his own, Training Stable Kloevensteen, in Schenefeld, Germany. Koschel will coach the Swiss dressage team once a month in Zurich and will help the riders at all big CDI competitions and championships. Koschel signed a contract to maintain this position until 2004.