Warkant, Hanoverian Stallion of the Year 2002 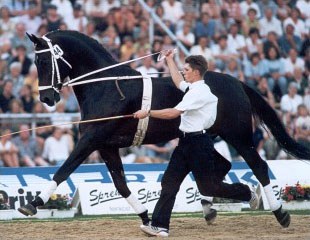 The Celle state stud stallion Warkant by World Cup/Grande is the Hanoverian Stallion of the Year. The audience in the crowded Niedersachsenhalle applauded when his breeder, Helga Axhausen from Schiffdorf, received the valuable Wohlklang-statue

as well as the cheque for 10.000,- EUR. For 10 years now, the "Uelzener Versicherungen" has been awarding prizes to tried and tested Hanoverian breeding stallions. This is to thank the breeders for the excellent and tradition-conscious co-operation.

Warkant was born in 1983 on Helga Axhausen’s farm in Schiffdorf near Cuxhaven. He spent his youth on the stallion rearing station Hunnesrück. Because of an injury, he could not participate at the stallion performance test’s finals. His final result was projected up to 119,20 points. Warkant was the winner of the licensing of the Hunnesrück stallions. In 1987, he started his breeding career in Beedenbostel. From 1993 to 1998, Warkant was stationed in Celle before he moved to Grethem in 1999. He was one of the stars of the Celle stallion parades because of his excellent basic gaits and his expressive trot.

Warkant’s offspring caused a sensation on auctions and at tournaments. 37 of his offspring were the best horses of their auctions, 13 of them were sold at top prices of more than 50.000,- EUR. The lot went for example down at 200.0000,- EUR for Wilberforce by Warkant/Eiger or at the sensational amount of 255.000,- EUR for Wahajama by Warkant/Acapulco. Many of his offspring followed the successful path of auctions, federal championships and tournaments. In 1991, Wanessa by Warkant/Eiger won the Federal Championships of the German Riding Horse. In 1999, Wahajama followed in the dressage horse category. Presently, she is on her way to become one of the most successful dressage horses with Ann-Kathrin Linsenhoff. Wansuela Suerte by Warkant/Wachmann is another example. She counts among one of the most successful Grand Prix-horses trained by dressage trainer Hubertus Schmidt. World champion Ulla Salzgeber also bought a Warkant-offspring of exceptional quality: World Magic by Warkant/Cavalier is already qualified for the Nuremberg Championships.

Warkant is the sire of 46 state premium mares. His daughters passed their mare performance tests with excellent results. It ensued that Warkant achieved a marvellous breeding evaluation of 156 points and that he is one of Hanover’s top-quality dressage stallions. Nine of his sons were licensed.