Hohenstein, Trakehner Stallion of the Year 2002 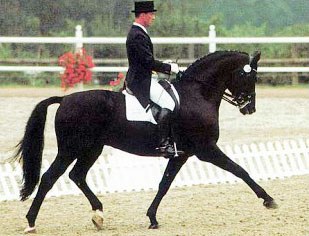 As a two year old stallion, Hohenstein got the premium title at the licensing. As a three-year old he finished second in the Stallion Performance Test in Adelheidsdorf. He was a finalist in the five-year old division at the German Bundeschampionate, and continued to be trained up to Intermediaire II level by Andreas Platzdasch.

His most famous licensed descendent is without a doubt Munchausen. The bay stallion, owned by Gestut Wiesenhof, became second under Fie Skarsoe as a six-year old at the 2001 World Championships for Young Dressage Horses in Verden. Hohenstein constantly produces top sport horses that are sold for high prices at the Elite Hanoverian auctions in Verden. At the 2002 Hanoverian Stallion Licensing, president of the American Hanoverian Society, Douglas W. Leatherdale, purchased the approved black Hohenstein x Donnerhall offspring (pictured) for 515.000,- €