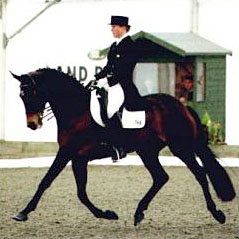 over the last couple of months and they have qualified to represent Ireland at the World Equestrian Games in Jerez, Spain next September.

Holstein also won the Prix St Georges class with her 10 year old mare Burgfraulein and they went on to slot into second place in the Intermediare I class. The following day (Friday 26th July 2002) Heike and Burgfraulein scored a double by winning both the Prix St Georges and Intermediare I classes at Addington. Welt Adel placed second in the Grand Prix class at Addington.

Heike travels to the European Young Riders Dressage Championships in Pratoni del Vivaro, Italy this week in her capacity as trainer to Irish young rider Judy Reynolds from Naas Co Kildare. Reynolds will ride her danish bred gelding Saturday Night at the championships where she will be joined by County Wicklow rider Gerald Bloomer who will compete on Fantastic Elastic. Eileen Kapp from County Galway is the Irish representative in the European Junior Dressage Championships being run concurrently at the same venue. Kapp has been in training with the reigning European Dressage Champion Ulla Salzgeber and she will compete with her Russian import Davis.

Meanwhile Irish riders Anne Marie Dunphy from Castlecomer, Co Kilkenny and Marguerite McSweeney from Portarlington, Co Laois travel to England this week to compete at shows in Bedford and Warwick. Anne Marie Dunphy made her international debut at the Soley CDI*** earlier this year and she using this trip as a warm up before competing at the CDI*** in Hickstead at the end of next month.