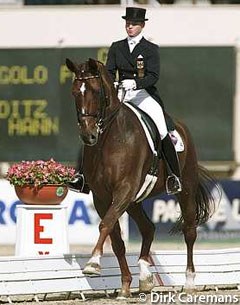 Germany's most successful dressage horse ever has been rejoined with his steady rider and partner Isabell Werth. The Hanoverian gelding Gigolo FRH (by Graditz) stayed with his owner Dr Uwe Schulten-Baumer

when Werth switched trainers and relocated from Rheinberg to Mellendorf in Germany. The 19-year old Gigolo stayed at Schulten-Baumer's and was ridden by one of the stable mates, but the situation recently changed.

After long pleading by Madeleine Winter and her husband Dieter Schulze, Gigolo will now be enjoying his retirement at their place in Mellendorf, where Isabell is currently training her four horses: Anthony, Apache, Richard Kimble and Satchmo. Gigolo will often go out in the fields with Priamos, Ludger Beerbaum's former show jumping mount. Gigolo and Isabell Werth earned 883.918 Deutsch Marks of prize money and became the most winning couple of the dressage scene.