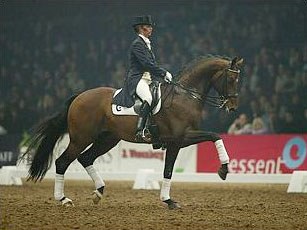 At the national Dutch dressage competition in Kootwijk, The Netherlands, Anky van Grunsven presented the KWPN/Oldenburg licensed stallion Krack C (by Flemming) for the very first time in the Grand Prix.

The gorgeous bay stallion received 68.90% from the panel of judges and took home the blue ribbon and trophy for his first Grand Prix test.

Imke Schellekens/Bartels finished second aboard the Russian gelding Gestion Janssen (by Fierant) with 65.60% and third was Leunis van Lieren aboard Hexagon's Louisville (by Burggraaf) with 63.80%

Van Grunsven was very pleased with her test. "My task was to present Krack C as relaxed as possible in the Grand Prix. He can do everything but is easily tensed. The piaffe and passage were not that flashy yet, but if he gains confidence in the ring, he will be impressive. I'm sure of it," Van Grunsven said. Krack C will make his international Grand Prix debut at the CDI Munich (May 10 - 12, 2002) together with Gonnelien Rothenberger's new Grand Prix horse. 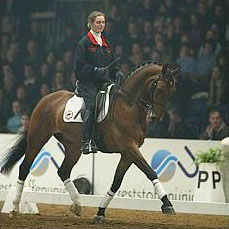 More quality tests were ridden in Kootwijk. Danielle van Aalderen won the junior riders' test aboard Marlies van Baalen's horse Inspekteur with a score of 70.29%. Van Aalderen's own mount, Festivo, is currently injured. In the Young Riders' division Thamar Zweistra was unbeatable aboard her sensitive Hexagon's Kyrain (by Cyrain). The duo rode to 69.87% mark. The Saturday Prix St Georges test was won by Liseon Kamper and Broere Montecristo (66.63%). On Sunday, Edward Gal dominated the St Georges with the KWPN licensed but Trakehner bred Gribaldi (by Kostolany). The pair scored 68.38%.