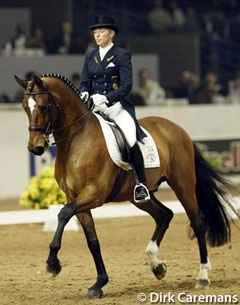 Revelation of the 2001/2002 Indoor Winter dressage show season was without a doubt Ingrid Klimke and Nector van het Carlshof. The 1999-2000-2001 German Eventing Champion Ingrid Klimke has ultimately proven that her well established roots, thanks to her legendary father Dr Reiner Klimke, lay in dressage.

Excited by the speed and danger of cross country, by the mathematical correctness of show jumping and by the patience, refinement and delicateness of dressage, Ingrid Klimke is "the" woman of versatility. Klimke was the best German Eventing rider at the 2000 Olympic Games in Sydney and was a German team member at the 2001 European Championships, but this winter she has surprised everyone by her accomplishments in dressage.

Aboard the 11-year old Belgian warmblood gelding Nector van het Carlshof, Ingrid Klimke finished seventh overall with 75.11% at the 2002 World Cup Dressage Finals in 's Hertogenbosch, The Netherlands. It was due to Gonnelien Rothenberger's cancellation of her entry in the Finals that Klimke was allowed to compete in Den Bosch. Her best ranking in the World Cup Qualifiers was a third place at the CDI-W in Paris. 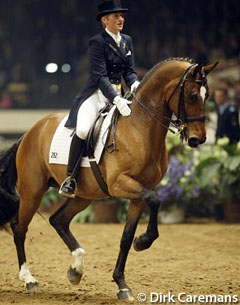 Nector van het Carlshof (Randel Z x Lombard) is one of the undisputedly best BWP bred dressage horses ever. His sensitivity and potential have no limits and the bay gelding makes a perfect match with young Klimke. In 1997, Nector gained his first fame by becoming the Belgian LRV Champion Dressage under Herman Nyssen. He then got trained by Jan Dupont, through whom Australian Christine Doan spotted his talent. Nector moved into the ownership of an Australian couple which moved the horse to Germany at the beginning of 2000. Michael Klimke first trained Nector, but Ingrid quickly took over the reins from her brother. A turn for the good, because Nector and Ingrid make a talented pair.