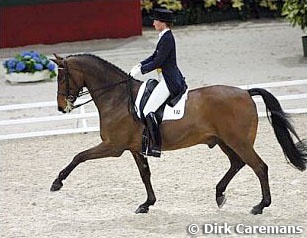 Seventh placed in the Western European League of the 2001/2002 World Cup Dressage Finals and 9th in the Finals at the CDI 's Hertogenbosch, the Netherlands, March 21 - 24, 2002, was Gina Capellmann-Lutkemeier with Amando.

Finally back on the scene, Gina Capellmann-Lutkemeier thanks all her successes to her new star, Amando. The 12-year old Swedish warmblood (by Flyinge Amiral x Indus) is bred by Susanne Hall. The bay gelding offered Capellmann a third place this year in the CDI-W Berlin, and two fourth places at the CDI-W Mechelen and Paris.