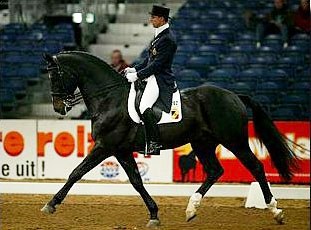 Beating one of the most praised and talented combinations of The Netherlands, Anne van Olst with Negro (by Ferro), Stefan and Saros were the invincible pair in the Ijslandhallen in Zwolle. Scoring 67,90% in the qualifier, Saros claimed his first trophy in Zwolle and was the golden hopeful for the finals. In the finals, Van Ingelgem rode the black licensed stallion to a 70,72 % mark leaving second placed Anne van Olst with 68,92% far behind him.

Saros van het Gestelhof is bred and owned by Louis van Gestel from Meerhout, Belgium. The Belgian warmblood stallion got licensed as a three year old and started a successful career as dressage horse under Stefan van Ingelgem. 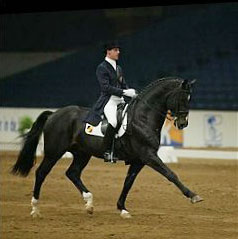 As a four year old, Saros became reserve Belgian Young Dressage Horse Champion, but claimed the title both as a five- and six-year old. At the 2002 World Championships for Young Dressage Horses in Verden, Saros finished at a distinctive fourth place behind powerful German and Dutch combinations. As a seven-year old, Saros has remarkably shown to be fit for the Prix St Georges level.