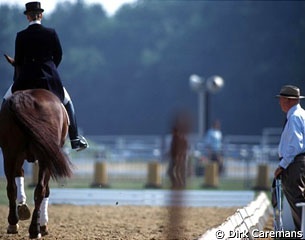 The final schism between the most successful dressage rider ever Isabell Werth and her trainer Dr Uwe Schulten-Baumer has been made official. At the end of October 2001, Werth already left the training facility in Rheinberg

to relocate at Madeleine Winter-Schulze's stable in Mellendorf, Germany, but Werth remained under the professional supervision of Schulten-Baumer. Unfortunately, this has come to an end to and Isabell Werth is not completely going her own way.

For 15 years, Werth and Schulten-Baumer were the dynamic duo on the German and international dressage scene, claiming trophy after trophy. The 76-year-old Schulten-Baumer shows obvious signs of sadness and even a broken heart, because of this schism. "Of course it hurts," Schulten-Baumer said. "We have worked together for such a long time." Together, the duo claimed 19 gold medals at world and European championships and Olympic Games. Although Werth claims that she owes every twist of fortune to Schulten-Baumer, Werth has taken a new turn in life. Not only did she accepted a job in the marketing department of Karstadt, but she also moved into a new house and received new sponsors and a new trainer. Isabell Werth is currently training with the 44-year old Wolfram Wittig.