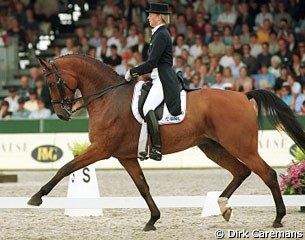 Seventeen years after its birth, the FEI World Cup of dressage arrives for the first time in our Country with the three days of San Patrignano. From friday 25th to sunday 27th the big indoor horse court of the Community

will be indeed the stage on which some of the most known combinations of the dressage worldwide will perform, allowing to equestrian's fans and sporting to meet, exhibited to its highest levels, one of the most enchanting Olympic specialties of the equestrians.

A fact highlighted by the President of the Italian Federation, Cesare Croce, "I think that the San Patrignano's stage of the FEI World Cup it is another signal of our commitment in promoting the equestrian sports in Italy. Since the roman Wegs up to now, thanks to the efforts of the many organizing Committees, we are presenting a competitions' calendar of absolute technical and spectacular level. It must be noticed that, thanks to the commitment, the enthusiasm and the professionality of the San Patrignano Community's guests, how we have been able to organize a such important event in a so short time. A concept taken also by Giacomo Muccioli: "Our Community deeply believes in the educational and vocational value of the sport. For us the horses are, first of all, therapeutic "tools" which are helping people to get rid of drugs and, in the same time, to learn a profession which will allow them to be fully reinserted into society. This is the actual meaning of our presence in the world of equestrians and the fact that FEI and FISE have considered us to be able to realize in a such short time a so important event it is a confirmation of the quality and of the extraordinary skills of the San Patrignano's guests.

To the competition will participate 35 riders, with 50 horses, representing 13 countries (Austria, France, Germany, Japan, United Kingdom, Italy, The Netherlands, Portugal, Russia, Spain, Switzerland, South Africa, Ukraine) and, among them, must be highlighted the presence of some riders and amazons currently at the top of the worldwide rankings such as: the Swiss Daniel Ramsaier (n° 2 in the World Cup ranking), the Spanish Beatriz Ferrer-Salat (n°4), the dutch Gonnelien Rothenberger-Gordijn (n°5) and the Austrian Stefan Peter (n°7). Quite thick also the Italian participation, headed by the two most important riders of our dressage: Pia Laus and the Italian champion Laura Conz.

The competitions programme will open on friday 25th at 2pm, with the "Short Grand Prix", a trial valid to qualify the best 12 riders who will take part to the "G.P. Free Style" (Kur competition with music). On saturday 26th the competitions will start in the morning with the "Prix St. George" (at 9am) and they'll close with the "New Grand Prix 2002" (at 2pm). Closure of the event on sunday 27th; after the first race, "Kur with Intermediate Music 1" (at 9am), the San Patrignano's show will finissh with the most awaited race, the "World Cup Grand Prix" (at 2pm).

The sport branch of the Italian media Rai will follow the show with a live TV broadcast on Raisat on sunday from 2.30pm to 4pm. For the public the entrance at the show it's free for the whole three days.