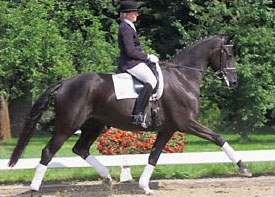 The 22nd PSI-Auction in Ankum, Germany, was once again a money-throwing-extravaganza but the top record of 2.8 million DM for Lord Sinclair a few years ago has not been broken.

The PSI-auction is known to be the most expensive auction for show jumping and dressage youngsters and is organised by Paul Schockemole and Ullrich Kasselmann. With 50 horses sold, a total of 20.343 million Deutsch Mark was raised.