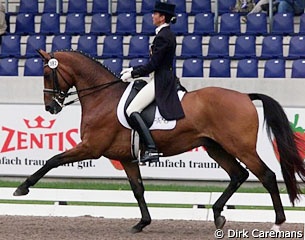 The weekend of November 29 to December 1, 2001, was the time for the 2001 Spanish Dressage Championships in Malaga, Spain. Like expected, it was Beatriz Ferrer-Salat who took home the trophy, blue ribbon and national title.

Aboard the bay Hanoverian gelding Vital Robert Beauvalais, Ferrer-Salat scored 71.70% in the Grand Prix, 72.70% in the Special and 74.60% in the Kur to Music. With these wonderful scores she pushed Ignacio Ramblo with the Andalusian Granadero into the silver medal position. The bronze medal went to Jose Manuel Lucena and his Andalusian Aljarafe, the mount ridden by Luis Lucia at the 2000 Olympic Games.

Other participants were Nuria Vila with Zorro-Z, finishing 6th, Eduardo Mellado and "Hortelano" placing 5th and Eva Navarro on Atiza II, ending in 8th position. The fact that two of the most important Spanish riders were absent from the national championships must be taken into account. Both Rafael Soto's Invasor and Juan Antonio Jimenez' Guizo are injured.