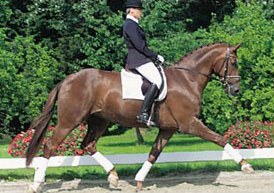 Once a year the treasure chest is opened, allowing a collection of exquisite, top-quality dressage and show jumping horses to emerge. The P.S.I. Auction, which takes place in winter in the north German location of Ankum, then becomes a meeting point

for equestrian sports legends, recent Olympic winners, ambitious up-and-coming young riders and patrons who want to acquire young horses which can be used in international equestrian sport. This auction is also an attraction for many other riders and breeders because it is the only place in the world where you can see such a range of perfectly trained horses with such outstanding movements and jumping potentials.

Meanwhile, quite a number of auctions have taken place - each with its own special sensation. On a number of occasions the price of a million German Marks has been exceeded, the record of DM 2.8 million for the German Federal Champion "Lord Sinclair", however, is one which will be very difficult to break.