Distelzar, Highlight of the 2001 Elite Trakehner Auction at Klosterhof Medingen 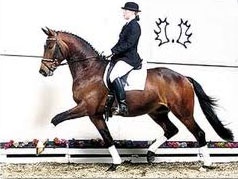 At the 2001 edition of the Elite Auction of Trakehner Sport Horses at Klosterhof Medingen in Bad Bevensen, Germany, the top knock down price was 600,000 DM for Distelzar. The first, in Germany, approved son by the Dutch stationed stallion Gribaldi (s. Kostolany) was sold to Switzerland.

Bred by Gestut Lindenhof, Distelzar is a radiant bay licensed stallion with three superb gaits. The second highest price was 375,000 DM paid for Konradi, a bay stallion bred by Walter Gerke. Konradi, by Charly Chaplin x Arogno, is moving to a dressage stable in Bremen.

The chestnut stallion Prêt-à-porter produced a 320,000 knock down price. Descending out of the Ivernel x Socrates line, Prêt-à-porter was bred by Klosterhof Medingen itself. The chestnut was an 1c premium stallion at the licensing in Neumünster, 2000. The P-family of the Klosterhof has produced numerous amounts of approved stallions as well as several very successful sports horses, for example Prätorious, who won the German Eventing Championships in 1986. The beautiful dark bay Kapriolan was bred on the farm of Otto Langels, who already raised the Olympic medallist Peron. Sired by Exclusiv x Enrico Carusa, Kapriolan was worth 300,000DM.

The average price for a Trakehner youngster at the 81st Elite auction was 100.117,00 DM