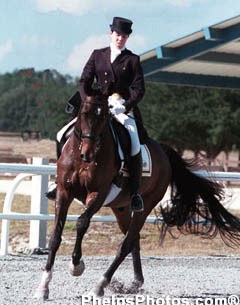 Eden, 20, of Lake Mary, FL, won the dressage Gold and the Fiona Baan Trophy on her 10-year-old, Dutch-bred Picasso with a three-round score of 201.85%. She scored 67.95% in the final Freestyle phase to clinch the Gold to go with the team Gold she won as part of the Region 3 team earlier in the week.

“I was trying my best not to think about it before my ride,” Eden said. “I came here not expecting a medal at all and I’m in shock that I won the Gold! This is the biggest event I’ve ever done. I just can’t believe it.”

Dressage rider Alison Bush won the Colonel Donald Thackery Award. Bush earned this award for her support as a groom after being unable to ride on the Region 2 team herself.

The Gold Medal Team consisted of Lesley Eden and her mount, Picasso, of Lake Mary, FL, Courtney Raiser and her horse, Our Conversation, of Lilburn, GA, and Gwen Poulin of Deleon Springs, FL with Pik Cachet. All three riders also qualified for the Individual Dressage Championship. Despite riding with only a three-person team that left them without a ‘drop’ score, they amassed a strong combined total of 3755 points.

Eden also leads in the Individual Dressage Championship. “My horse was super today,” she stated. “This is my first time at the NAYRC and I hoped to do well, but I wasn’t expecting anything. I am very pleased with our performance.”

With a combined score of 3729 points, the Dressage Team Silver Medal went to the Region 1 Team of Camilla Goodchild of Greensboro, NC, Kerri Sowers of Egg Harbor, NJ, and sisters Catherine and Mary Alice Malone, Jr. of Coatesville, PA. Scoring 3656 points, Region 2 took the Bronze Medal. In show jumping action, Emily Williams and her speedy jumper, Oyster, raced to victory in the first championship class in a time of 77.19 seconds. Ashlee Bond of Calabassas, CA rode Pablo in a time of 79.02 seconds to take second place.