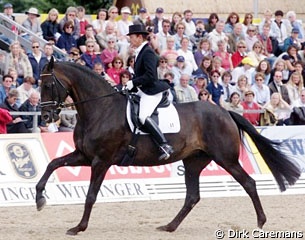 At the World Championships of young horses Karin Rehbein and her Hanoverian mare Cherie had have a fantastic start in the class of the six-years-olds.

The rider presented the Don Primero-daughter in a nearly perfect way and got from the judges Bernard Maurel, Christoph Hess and Bo Tibblin the top score of 9,0 points. This is the first place after the first qualification.

Second came Christa Laarakkers from the Netherlands with Noraly by Jet Set (8,8 points), followed by the Trakehner stallion Münchhausen with Fie Christine Skarsoe in the saddle. Fourth and fifth came Dr. Ulf Möller with the Hanoverian Placido and Stefan van Ingelheim with Saros van het Gestelhof