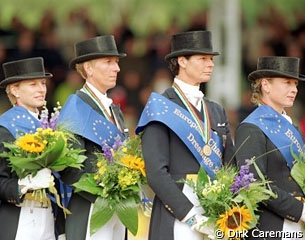 With this result the team confirmed its role as favourite. The coach of the German dressage team Holger Schmezer was obviously satisfied with his “girls”. A few thousand spectators acclaimed the German gold team in the Verden dressage arena. 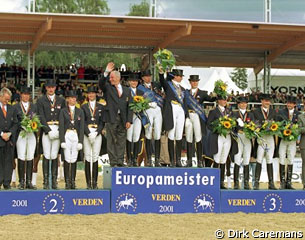 Fourth and fifth became the teams from Spain and Sweden. The result of the Grand Prix is also counted as first result for the individual competition. Here it looks as if come to a duel between the German riders Nadine Capellmann with Farbenfroh, who are in the lead with 1931 points, and Ulla Salzgeber with Rusty (1875 points). The second qualification is the Grand Prix Special which takes place on Saturday. The decision will fall in the Grand Prix freestyle to music on Sunday.

Back to the 2001 European Championships' Index