Nadine Capellmann dominates the first part of the Grand Prix 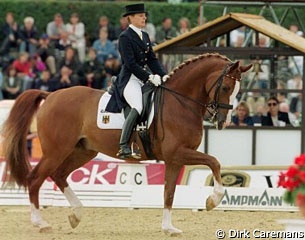 “Everything came as it was expected” could be the headline of the second day of the European Dressage Championships. It came to no surprises in the first part of the team competition, the Grand Prix.

As expected before, it will come to a duel between the leading nations in the dressage sports, Germany and the Netherlands. The German riders Nadine Capellmann with Farbenfroh and Isabell Werth with Anthony FRH started in the first part of the team competition. Especially Nadine Capellmann could fire the audience. With 77,24% she dominated her competitors. With 71,84% Isabell Werth came fourth.

The Netherlands came second and third: With 72,72% Arjen Teeuwissen with Gestion Goliath is on the second place at the moment and Gonnelien Rothenberger-Gordijn with Jonggor’s Weyden is on place three. The Danish rider Lone Jörgensen with FBW Kennedy came fifth, followed by the Austrian rider Andrea John with Hermes on place six.

The decision in the team-competition will fall in the second part of the Grand Prix, which takes place on Friday. Especially the start of the favourites Ulla Salzgeber and Rusty is eagerly awaited. As the winner of the World Cup said before: “I will take it in a relaxed way. We are in a good form.” Heike Kemmer with Albano is the fourth starter for the German team on Friday. For the Netherlands the Olympic Champion Anky van Grunsven with Gestion Idool and Ellen Bontje with Gestion Silvano will also start on Friday.

Back to the 2001 European Championships' Index