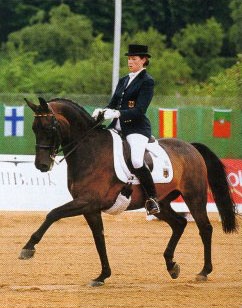 The "triple crown" in dressage for German Junior and Young Riders can supposedly be constituted by the German "Preis der Besten" in Warendorf, the European JR/YR Championships and the German national dressage championships.

To win all three events in a row would be a rare and exceptional accomplishment in Germany.

However, this year seems to be a prime year for German dressage. In the Junior Riders' division starlight Lena Alexandra Torloxten won this so called triple crown aboard the Oldenburg Rio's Chalston. After having won the Preis der Besten, as well as the European Junior Riders Championships, Torloxten reigned supreme at the German Dressage Championships in Elmlohe, Germany. She claimed her first golden national title. The silver medal was won by Dirk Viebrock with Willy the Kid while Jessica Werndl, a former successful FEI pony dressage rider, claimed bronze aboard Nokturn. Juliane Brunkhorst, who performed very strongly at the European Championships, was now fourth. Her horse, the Hanoverian La Boom, is 17-years old and will be retired this month.

In the Young Riders' class Nicola Giesen has been the undefeated champion. Preis der Besten, the CDI Aachen, the European Young Riders' Championships and the German Dressage Championships were all a piece of cake for Giesen. Trained by Heiner Schiergen, Giesen conquered her national title in Elmlohe with her steady mount Slow Fox (by Saros xx). Julia Katharina von Platen on Mocca received silver and Julia Beckfield rode to the bronze medal aboard Victor B.