Chacomo Not Part of German team for 2001 European Dressage Championships 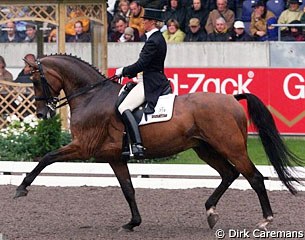 Alexandra Simons-De Ridder and Chacomo will not be part of the German team for the 2001 European Dressage Championships in Verden, August 8-12, 2001.

Simons-De Ridder announced that Chacomo has a throat infection so that they can not enter the last qualifier in Munster. In two weeks, the German Dressage Championships are held in Munster and count as final qualifier for the European Championships.

Simons-De Ridder, who was slightly disappointed with her scores at the CDI Aachen, will not ride in Munster with her lovely Holsteiner Chacomo.