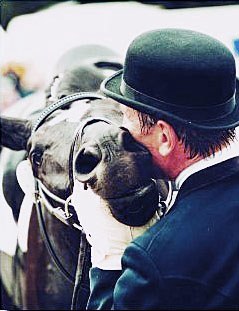 For more than 30 years, Werner Ernst (67) from Ganderkesee has been documenting equestrian sport in pictures, and since 1972, he has been at each and every CHIO Aachen. He knows all the top riders - and they know him.

The 'Silver Camera' has for some years been awared by the CHIO Aachen, the international equestrian federation and the Sparkassen for special photos in horseriding. Werner Ernst made such a 'shot' at last year's German National Young Horse Championship in Warendorf. The picture shows the four-year-old Trakehner stallion Latimer, 'cuddling up' with his rider Hans-Jürgen Ambrust after they had just won the class. "I had watched the pair, which incidentially I have known for years, for quite some time. It was quite clear to me that the horse was looking for close bodily contact with his rider. As if he wanted to thank Hans-Jürgen for his fair treatment", analysed the hobby rider and internationally renowned photographer. The picture is called "thank you, partner". The speech was given by World champion Rodrigo Pessoa (28).

The second place went to "And Both Walked Away Unhurt" and Barry O'Brian from Australia. The jury awarded the third prize to "Emotion Sydney 2000," the work of Jan Gyllesten of Sweden. A special prize won the picture "time to say goodbye" made by Horst Rudel from Stuttgart.