German Team Leads after First Round in CDIO Grand Prix 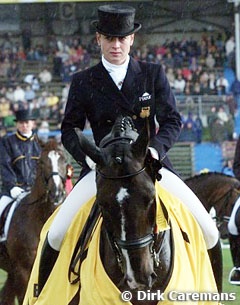 The German dressage riders are on track in the Nations Cup: after the first part of the "Coastriders Grand Prix" Germany leads the rankings ahead of Spain and the Netherlands.

In the morning Karin Rehbein herself shared first place in the Prix St. Georges, the "Prize of Demmer Haus der Geschenke KG" with European Young Rider Champion Nicola Giesen (Viersen) with Slow Fox. Rehbein rode Miss Holstein, with whom she won the important Nürnberger Burgpokal for Young Horses last year December in Frankfurt. In 1997 the same series was won by Chacomo with Alexandra Simons-de Ridder (Aachen) before his impressive career started. Meanwhile the combination won Olympic team gold and the European individual title. On Thursday they will be the first ones to enter the ring in the second part of the "Coastriders Grand Prix" in the Deutsche Bank Dressage Stadium. Fourth and fifth to start for the German team are Heike Kemmer (Isernhagen) and Ulla Salzgeber (Bad Wörishofen). For the Netherlands Olympic Champion Anky van Grunsven is on the start list.

Back to the 2001 CDIO Aachen Index