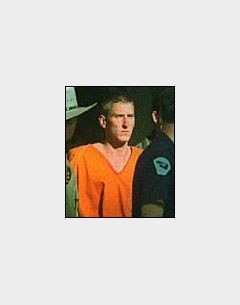 McVeigh was executed for the April 19, 1995, attack in Oklahoma City that killed 168 people and wounded hundreds more. The bombing was the deadliest terrorism act ever on U.S. soil. McVeigh's death was the first federal execution since 1963.

The 33-year-old Gulf War veteran did not say a word in the final minutes before his execution. Media witnesses said McVeigh lifted his head and looked at them and then looked at the ceiling. He died with his eyes open. McVeigh left a handwritten statement quoting Invictus, a 19th century poem by British poet William Ernest Henley. It ends with the lines "I am the master of my fate: I am the captain of my soul."

Of course my sympathies go out to the families of the assassined victims of the Oklahomo Bombing, but execution is not the solution to deal with criminals like McVeigh!

CUADP vows for alternatives and calls the McVeigh case a media circus:

"Constitutional protections must prevail even for the lowest and most hated individuals, because if they do not, then we are all at greater risk for abuse within the criminal justice system. The fact that Americans are being forced to swallow the bitter realization that the humans within the system can and do make mistakes can only be seen as a positive development. If they can bungle a case with such intense media scrutiny as McVeigh's, what's happening in the cases where nobody is watching? Should we allow executions to continue in the face of a system so fraught with error and official misconduct? If we do, are any of us really safe?"

By the way, while you are at it, think about Hiroshima, Lockerby, Israel-Palestinia and the Balkan territory too and put things in perspective, please!?

Feel free to react. This is not, in any way, an attack against the American government. This is just raising the conscience of people who still believe in the death penalty.