Torloxten and Giesen In the Picture at 2001 Preis der Besten 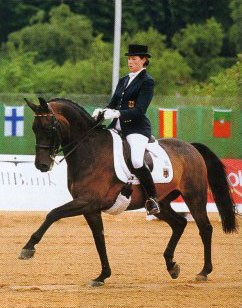 Show organizer Christoph Hess had nothing to complain about after his successful youth rider competition "Preis der Besten" at the German federal equestrian center in Warendorf, Germany.

The Foot and Mouth crisis left no traces as the best best young riders from whole Germany travelled to the Westphalian province to compete in one of the most prestigious German youth competitions.

German junior and young rider chef d'equipe Holger Schmezer was very pleased with the performances of his riders. "In the junior rider division we had a whole new group of top level riders who are hopefuls for the European Championship team. The decision is still to be made and it will be hard to select the five best junior riders," Schmezer said. The Young Riders were in top condition and the usual team proved that once by producing high scores. "There are three new combinations that struck my attention as they were able to match up with the score of the team riders," Schmezer uttered. In the Pony division three former Championship riders were able to rank in the top again and with a broad pack in the middle, the German pony team should not fear the future.

German Young Rider Team trainer Dolf-Dietram Keller was immensely pleased with the young riders' performances. "We have seen tests of a very high level. We are lucky to have such a large list of top young riders who show championship potential," Keller said.

German Reserve Champion Nicole Giesen from Viersen (GER) dominated both qualifying tests aboard the chestnut Dutch bred Slow Fox V. "We have seen an exceptionally controlled ride depicting the enormous feeling of the rider," so did Keller describe Giesen's ride. Second place was covered by Jan Andreas Viebrock with his 17-year-old Astolfi and Julia Katharina von Platen on the Hanoverian Mocca.

Three combinations especially showed striking progress at the Preis der Besten, which made them earn a ticket to the C-frame. Tobias Wilmes from Munich will turn 19 in August and this is his first year as a young rider. With Samson he finished eight overall . German Young Riders' Champion Viktoria Eulner with her Rendez Vous and Verena Theymann aboard Felix were also able to impress Keller and gave them a chance to be selected for the German Young Riders' Team.

Even though five of the last year's prime junior riders presented their horses at the Preis der Besten for junior riders this year, it were two new comers who actually stole the show in Warendorf. Lena-Alexandra Torloxten saddled a horse-with-a-history for this Preis der Besten and conquered. Aboard Rio's Chalston, Torloxten won both junior riders tests and took home the overall victory. Second new comer, the former pony rider Jessica Werndl, impressed the judges with her Nokturn and finished second overall. The performances of the more experienced riders were a boost for the confidence of the German junior riders team which hopes to capture again the team gold at the European Junior Riders Championships this year. Isabelle Kettner with Avangard, Kira Kroncke with Mont Royal and Dirk Viebrock with Wyoming and Willy the Kid are three exceptional riders that create a quality fivesome for the Championships.

Team trainer Hans-Heinrich Meyer zu Strohen commented that "Lena-Alexandra Torloxten are a perfect example of a superbly matching pair." The 16-year-old Torloxten already had some experience competing at M-level but with the 15-year-old Oldenburger gelding Rio's Chalston she will be able to break through at the international FEI junior riders' level. For one year now, Torloxten has been riding Rio Chalston, who is stabled at Bianca Kasselmann's farm in Hagen, Germany. In Germany junior riders are encouraged to enter this division with experienced schoolmasters. Like Torloxten, Katharina Freitag saddled a schoolmaster and not just a regular one. Freitag will be competing the Hanoverian Whar Joy, three times gold team medallist of Astrid Buer. And above all, Eva Marie Aufrecht is competing the double European Young Riders' Dressage champion Amica Farina. Kathrin Gerken has been successful with Win for Me and is selected for the A-frame.

Team coach Hans Heinrich Meyer Zu Strohen explains that "it is important that the young riders are solidly trained and continually supported by the trainer and parents, and of course by the horse."