Zeilinger and Salzgeber Rule in Stuttgart 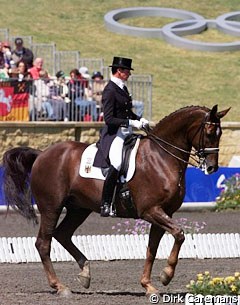 The Time has Come, The Salzgeber Era has Commenced

The European winter show circuit took off with the CDI-W Berlin just two weeks ago but is already reaching a climax with the Stuttgart German Masters Competition.

Ulla Salzgeber, A citizen of Bad Worishofen in Bavaria, showed what the future has in store. With her Olympic bronze horse Rusty, Salzgeber dominated both Grand Prix and Special in the German Masters competition. With a 77.17% and 79.44% score, Salzgeber indicated that she's is now the leading dressage rider in the world.

Livinjo Makes a Dream Come True
Another rising star is Rudolf Zeilinger on his Hanoverian Livinjo (by Lysander). Although the pair has been showing Grand Prix for quite a while, they still seem to be making progress. In Stuttgart, Zeilinger was second in the short Grand Prix with 71.17%. Heike Kemmer and Albano (by Argentinus) were the only combination able to pass him. In the freestyle, however, the Bremen-duo reigned supreme by putting 78.42% on the scoreboard. "This is the highlight of my career," Zeilinger said," last year my student Lars Petersen won this class, and now I did it. This is simply heaven." The class, which had a 40,000 DM purse, was sponsored by his Royal Highness Carl, Duke of Baden Wurttemberg.

Isabell Werth, Moving the Hearts of Thousands
Although Salzgeber and Zeilinger were the leading stars in Stuttgart, it was Isabell Werth who moved the hearts of many with Gigolo FRH and Agnelli FRH. For a second, consecutive time Werth received the Otto-Lörke preis, an award offered to the rider, owner and breeder of the most successful Grand Prix horse under the age of 10. It was Werth's Agnelli FRH, a chestnut Hanoverian by Akzent II, who got laureled for this occassion.

Highlight of the CDI Stuttgart was without a doubt the official retirement party of the 17-year-old Gigolo in front of 60,000 spectators. Constantly in tears, Isabell rode once more her Olympic freestyle titled "Gigolo's Journey". Through the microphone Werth thanked her trainer and sponsor Dr Uwe Schulten-Baumer sr. for his continuous support and Uwe jr. for finding Gigolo as a 5-year-old. With a winning sum of 800,000 DM of prize money, Gigolo FRH is the most successful dressage horse ever.