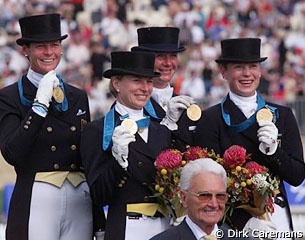 27 September 2000 - Germany won the team dressage gold medal on Wednesday, their fifth successive Olympic title, holding off a strong challenge from the Netherlands.

Germany's best three riders finished on 5,638 points ahead of the Netherlands on 5,579 and the United States on 5,165 points. Germany have now won each team dressage gold medal since the 1984 Los Angeles Games, and at eight of the last ten Olympic Games. For the third straight Games the Netherlands won silver and the US won bronze.

The German and Dutch riders operated on a different level to the rest of the field, with the two teams accounting for eight of the top nine individual scores of the competition.

Only Denmark's Lone Jorgensen could get near them, posting an individual score of 1,796 points to be eighth in the individual contest. No one from any other nation scored above 1,750 points. 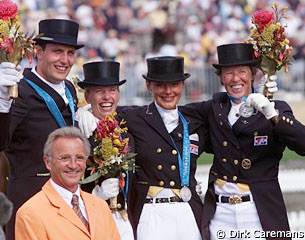 As well as deciding the teams event, Tuesday and Wednesday's grand prix was the first of three rounds in the individual competition of 48 riders.

The top 25 riders now progress to the grand prix special on Friday, with the top 15 after that competing in a freestyle round on Saturday to determine the individual medallists.

Germany and The Netherlands Head to Head

26 September 2000 - The near capacity crowd of 19,500 at the Equestrian Team Dressage competition on Tuesday saw what was expected: the favourites for Team gold, Germany and the Netherlands, went head to head.

With 25 of the 48 competitors riding the Grand Prix test on the first day of Dressage competition, Germany leads the field with a score of 3764. The Netherlands are placed second, 104 penalties behind.

World champion and Individual gold medallist at the Atlanta 1996 Olympic Games, Isabell Werth (Germany) and Gigolo performed a mistake-free Grand Prix test to achieve the highest score of the day. 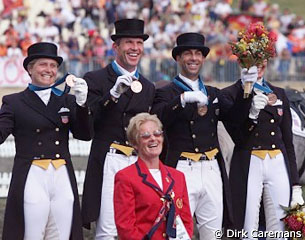 At his fifth Olympics, Robert Dover (USA) guided his second string horse, the inexperienced Ranier, around the 60m x 20m arena with flair and was pleased with the result, placing him ninth overall. His teammate Susan Blinks rode the final test of the day with Flim Flam to place the USA in third place, overtaking Australia.

Ulla Hakanson (Sweden) missed her chance for a ride at her sixth OIympic Games when her horse Bobby was withdrawn from the competition at the last minute. As the best three scores of a team count towards final team placings, Sweden is still in the race.

With two riders from each country's team of four still to ride, the Team Dressage competition remains wide open. Competition continues on Wednesday at 10:00. The medal ceremony begins at 15:45.