Guinness Not Going to the 2000 Olympics 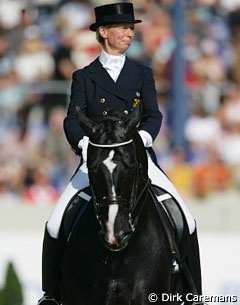 Never before have the Scandinavian countries had so little luck with Olympic Games. Sweden will miss its number one rider Louise Nathhorst, as her Guiness is still injured.

The Danish warmblood, sired by Dolomit out of an Elizar dam, got a shoulder injury at the CHIO Aachen, July 2000. Even though the dark bay was in quarantine, Nathhorst decided to spare him from the flight because he did not recover in time. Sweden will start with Jan Brink, Ulla Hakanson, Peter Marnke and Tinne Vilhelmson as team members.

Because Kyra Kyrklund is staying home from her fifth Olympic Games, the Finnish team became incomplete with only three combinations. Denmark is missing top horse Blue Hors Cavan and has chosen Morten Thomson's Gay as replacement.