Dollmann I and Florett As, Silver and Bronze 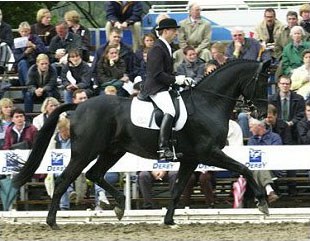 The silver in this class went to a lovely Westfalian stallion named Dollmann I. Olaf Harke showed the black to a 61.50 overall score.

The walk was clean but a little tensed and in canter the Westfalian came a bit tight in the neck, preventing him from stretching throughout the body in extensions. Both gaits received 8.5. Dollmann I, by Davignon II x Amor, excelled in his trot, which was rhythmical and large, and was honoured with a 9.0 for this gait. The 3-year-old became reserve champion of his class and will be auctioned at the Munster Elite Autumn Auction in October.

Runner Up was Florett As, a Westfalian by Florestan I x Urofino, who gathered an overall score of 58.50. Ridden by Henrike Sommer, Florett As missed the grandeur of Davidoff E and Dollmann but still flashed in his basic gaits. Fourth place was for Roubeni M, a chestnut Rohdiamant x Florestan I, who will be auctioned in Vechta under the name Royal Olymp. The Hanoverian Weissmüller (Weltmeyer x Boemerang) came in fifth.

Next Page of this Bundeschampionate Report