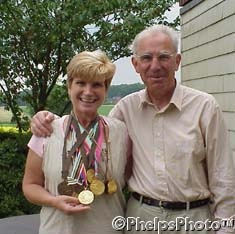 Dr Reiner Klimke once showed his collection of Olympic medals to American photographer Mary Phelps. He is the only equestrian athlete to win six Olympic medals ever.

Besides the memory, the medal is the only remnant left of a once-in-a-lifetime experience. This year's Olympic medal are even more special than all the others, already given to the world's best athletes. Traditionally, Pallas Athena, a Greek godess by Zeus out of Metis, and the Greek Parthenon are the signs embossed on the medal. The Australian Olympic Committee blundered immensely when they had the medals made. All bronze, silver and gold medals feature the Roman Collosseum instead of the Greek Parthenon.

The Australian Olympic Committee has been seriously reproached for this huge blunder. Even though both the Collosseum and the Parthenon are monuments out of the Ancient time, the Collosseum is a Roman amfitheater, built for fights and games. The Greek Parthenon, located in Athens, Greece, the cradle of the Olympic Games, is a temple in honour of Athena.

the Greek citizens of Australia call this blunder "the apex of ingnorance". The Australian Olympic Committee announced that there was not time left to melt and reshape the medals. The only good thing about this is that the 2000 Olympic Medals will become a true collector's item.