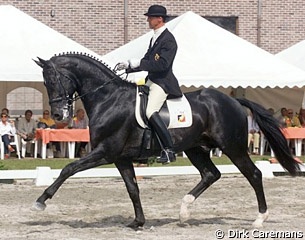 The end of August and the beginning of September always offer an international range of Young Dressage Horse Championships in Belgium, The Netherlands and Germany, the three leading equestrian countries in Europe.

The Belgian Championships for future dressage stars ranging from the age of 4 to 6 took place the weekend of 27th August 2000. Weltmann, a Hanoverian bred Weltmeyer x Wesley chesnut ridden by Stefan van Ingelgem, was the best in the 4-year old division. In the 5-year-old class the Belgian warmblood Saros van het Gestelhof, also ridden by Stefan van Ingelgem but owned by Louis van Gestel, was the strongest. The black BWP approved stallion by Ramiro out of a Pik Koenig dam won the two qualifiers and the final. The divine Rosantica, a Belgian warmblood mare by Camus out of Madeleine xx (by Saint Philippe xx), maintains to be Belgium's ambassador for young Belgian dressage horses. She won her second, consecutive national title. The chestnut mare moved like the best and controlled her exercises extremely well in Wiekevorst, where the Championships were hosted.