The Way to Go to a Show: 2000 Olympic Air Transport 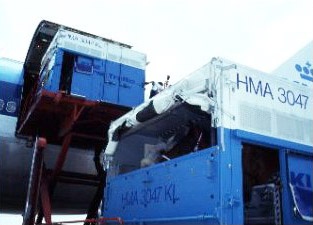 FEI Press Release  -- Two B747 Lufthansa freight aircrafts making two runs each will transport the Olympic European horses to Sydney and 6 weeks later back to Europe. The first Jumbo jet will leave Frankfurt on 20 August.

After unloading the 50-55 horses in Sydney, it will return to London Stanstead to pick-up another 50-55 horses to leave on 23 August. The second Jumbo will make both its runs from Frankfurt, leaving on 21 and 24 August. The flying time is 26 hours, including 2 fuel stops in Dubai and Singapore. At each stop, a new crew, including three pilots will take over. In addition to the 50-55 horses, each aircraft will also transport up to 44 persons, including 3-4 veterinarians.

The Sydney Organising Committee (SOCOG) is paying for the air transport, on the basis of triple stalls (three horses per pallet). Since it has been customary also in the charters to the World Cup Finals to have the horses in double stalls (two horses per pallet) it can be expected that most horses will travel in double stalls, with the respective National Olympic Committee (NOC) paying the difference. In a double stall, the width is approx 120 cm, the length of a box 315 cm. In Frankfurt, a freight warehouse will be emptied on 18 August and stalls will be installed to allow the horses a 24-hour rest before departure. To reduce transport stress during take off and landing, it is foreseen that the plane will take off at an angle of 15 degrees (instead of the usual 35 degrees) and commence the landing phase much earlier than on a normal passenger flight.