The Super Bowl: Holland-Germany in Sydney 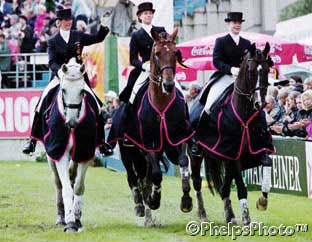 With at least two Olympic judges presiding at the CHIO Aachen, a thorough prognostication has been given of what the Olympics have in store.

The Dutch Dressage Championships caused much disturbance as Anky van Grunsven scored monster scores between 86 and 84%. But the fact that three judges were of Dutch nationality at these championships have to be taken into account. The final duel between Holland and Germany will take place in Sydney and never before is causing this event so much suspense and speculation. We'll see what happens. Will Bonfire, the supreme god in freestyle, persevere or will Gigolo, the ultimate classically trained dressage horse, win his second, consecutive Olympic gold medal. Everything will be determined in September 2000.

Back to the 2000 CDIO Aachen Index