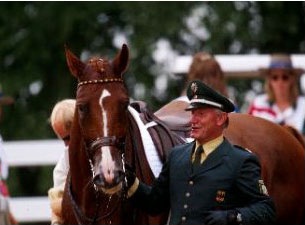 What importance do the German dressage championships have for the future? Balkenhol:  The show is the first qualifier for the German dressage riders for the Olympic Games in Sydney. It is also a trial where we select a team and individual combinations which can represent Germany at Aachen.

Were there any riders who received a wild card for the Championships?
Balkenhol: Not really. We left Isabell Werth to decide whether she would compete Nissan Gigolo FRH or not. Gigolo is 17 years old now and he will be spared from Balve for the Games. You'll see him one more time in action at Aachen.

At what point do you think the German riders are right now?
Balkenhol: I think, without exaggerating, that the German Dressage Team has never been this strong and I hope that they will still improve. Their health is in top shape. I hope that all of them will improve for Aachen and that they will reach the apex at the Olympic Games.

Do you create a certain battle plan with the riders?
Balkenhol: We agree in which nation competitions we will participate and when we make a decision I hope that we succeed, that the horses are in top shape for it.

What are the difficulties attached to the transport of the horses to Sydney? Are there any problems, fears?
Balkenhol: Of course it will be a long flight and it will be unconfortable for the horses. Then you have temperature differences within the plain. In front it is warmer than in the back and the horses can't leave the plane throughout the trip. Many horses don't water in the stalls in the plane. But overall the transport by plane is not too bad. Hopefully there won't be
much turbulence. There will be two lay-overs but the horses can't leave the plane.

Who do you believe to be the strongest competitors at the Olympic Games?
Balkenhol: The Dutch will probably be the strongest. The Danish are also very strong. They are working on a very good team. It will be a very interesting team challenge.

Will you be holding a training camp again before the Games?
Balkenhol: Of course you have to deal with the quarantaine. We will be holding a 14-days
intense training session during the quarantaine in Kronberg, Germany. And then of course 14 days in Sydney. These camps are very important and decisive.

When you look back on the Olympic Games in Seoul, Barcelona and Atlanta, do you see a developments in the Games?
Balkenhol: The Olympic Games get more and more marketed. It becomes a whole merchandising in which sport is forced to a background position. I regret that very much. Barcelona was just wonderful. The whole Games were very concentrated in the city meaning that the different sports came in contact with each other, even the different equestrian disciplines. We were able to have lunch with all the athletes, to grab a drunk or to chat with each other. We were able to communicate. In Atlanta that wasn't the case and I hope that in Sydney it won't get any worse. Because it's a trend that the equestrian sport is not predominantly present in the Olympic Games.
In older days, in Munich or Stockholm for instance, show jumping was held at the end of an Olympic game and it was held in the main arena!