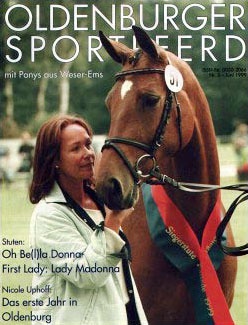 Lady Madonna, the, undisputed winner of the 1999 Elite Mare Show in Castle Park Rastede, Germany, was purchased by Houston resident Trish Monroe just before the championship was announced.

This lovely mare by Landor S out of an Argentinus dam, is being bred to the outstanding young stallion Quattro and for the time being the mare will stay in Germany. Eventually Mrs Monroe plans to bring Lady Madonna to her new home in Texas. St. Pr. St. Candidate Lady Madonna was bred by Clemens Fleming from Ehren and was purchased through the 1996 Vechta foal auction by Ingrid Bergman, her owner at Rastede. Lady Madonna's half sister St. Pr. St. Tettina by Silvio I, was the overall champion of the European Mare Championships in Brussels in 1996. Elite Mare Show Judge Dr Lehmann described Lady Madonna as "an excellently built mare with a lovely face and big sparkling eyes. The mare has an optimal, well muscled neck, a good shoulder, a strong, solid back with an fitting croup. Lady Madonna excels in her walk.

Image: Lady Madonna on the cover the "Oldenburger Sportpferd", a top quality magazine featuring all Oldenburger related equestrian news. A real recommendation for your subscription list!