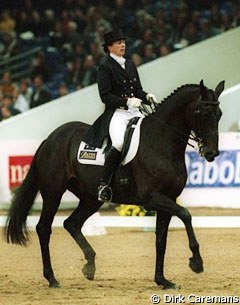 Bad fortune for Rozzie Ryan. The Australian based dressage rider came all the way to Europe for the Final but was unable to fulfil her task in Den Bosch.

Just before entering the ring for her final Kur to Music, Ryan's dark bay thoroughbred Exellent stepped into a nail near the in-gate and immediately went lame. Ryan had to abort her freestyle before even having entered the grand arena.

Exellent was transported to the Utrecht veterinarian hospital for further examination. Swedish O-judge Eric Lette still congratulated Ryan for her wonderful performance during the World Cup Qualifiers and the Final, in which she only rode the short Grand Prix.

American Cherri Reiber could not even ride the first leg, the Grand Prix, of the 2000 World Cup Dressage Final in De Brabanthallen of 's Hertogenbosch, The Netherlands. During the jog her 12 year old KWPN gelding G Tudor (by Tudor x Sand Pebble xx) appeared lame in front of the judges' panel and was therefore rejected.

G. Tudor got trailered to the veterinarian hospital in Utrecht for further examination. The other 15 horses qualified for the final passed the jog. Reiber's bay Grand Prix mount will be re-inspected the day before the final (Friday 24th March).