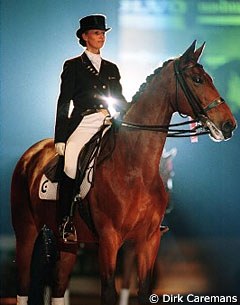 Anky van Grunsven has something special in store for her fans, cheering at her at the 2000 World Cup Dressage Final. Composers Cees Slings and Victor Kerkhof were assigned to assemble a new freestyle based on Anky's previously used soundtracks in this Olympic year.

"The freestyle is not ompletely new. On request of Anky and Sjef we manipulated older, previously used material," Cees Slings commented. Therefore the "new" Slngs/Kerkhof composition is titled 'Something Old, something New', which aims at reviving the experience of the 1994 World Equestrian Games where Anky won her first, grand freestyle title. Concerning quality and perfection the new freestyle is a product of the composers' duo, concerning concept, it is not. The freestyle should answer to the audience's call for recognisability and should ressemble Bonfire's balanced movements and Anky's urge for perfection.