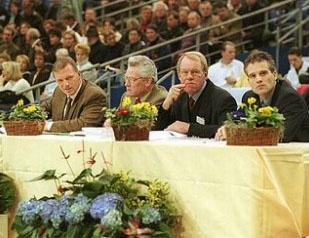 The annual KWPN stallion licensing days in 's Hertogenbosch, Holland, closed off with 57 riding horse stallions selected for the 70-day stallion test in Ermelo. The final number of qualified stallions was lower than last year, but this was a result of strict selecting

by the committee that consisted of Frenk Jespers, Jaap Werners, Hans Horn and Rob van Overbeek.

Trend breeding has been warp and woof in various European warmblood associations. While Germany places Donnerhall, Rohdiamant and Wolkentanz II on a pedestal, Ferro, Junior and Jazz are hyped in Holland. During the sold out KWPN dressage show on Friday evening, Anky van Grunsven and Tineke Bartels presented Junior and Jazz. The former is a Uniform descendant who knows the Grand Prix movements by heart but who wouldn't score when ridden by a different rider, the latter has more quality and can be consider a prospect for the future. 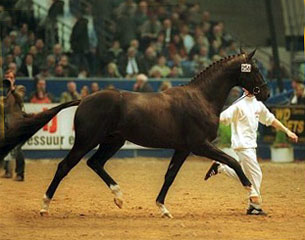 Luckily there are still a large number of Dutch breeders who are not influenced by the commercialization of stallions and who know how to pick their bloodlines. Most striking appearances were made by the get of the Trakehner sire Gribaldi (by Kostolany). He presented a collection of excellently built and decently moving offspring. Three of them received a ticket for Ermelo. The Gribaldi x Rogier (owned by De Jong and Van Uytert) appeared to be the most talented. The Gribaldi x Balzflug named Poegatsjov ranked third in the final standing.