World Cup I, Hanoverian Stallion of the Year 1997, Passed Away 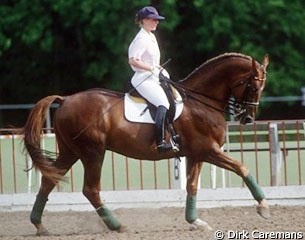 Another great sire left the breeding stage: World Cup I, Hanoverian Stallion of the Year 1996, has passed away.

The Celle State stallion by Woermann out of the mare Sendernixe by Sender was born in 1977. He was bred by Hans-Eduard Börger, Loxstedt-Neuenlande and grew up at the stallion rearing farm Hunnesrück. The chestnut stallion was the winner of the stallion performance test in 1980. scoring 137,65 points.

A fews years later he became Reserve Champion at the DLG-shows in Frankfurt (1984) and Hannover (1986). Breeders prefered World Cup I as a producer of excellent dressage horses.

Over his breeding career World Cup I has produced 424 sport horses (total prize money of offspring in competition: DM 837.984,00), 49 state premium mares and 17 licensed sons. One of his sons influenced the modern Hanoverian breeding like no one else: Weltmeyer. But also other sons of World Cup I like the Celle State stallions Warkant, Walt Disney I and II and Woodstock increased the glory of World Cup I, who became 23 years old.