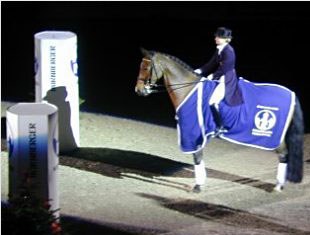 The German Nurnberger Burgpokal Finals, held in conjuction with the fifth World Cup Qualifier at the CDI-W Frankfurt, Germany, produced Cockney and Nadine Capellmann as champions of the highly respected show serie.

Sponsored by the insurance and finance agency Nurnberger Versicherungen, the Nurnberger Burgpokal runs over several Prix St. Georges level tests in which riders can collect points and qualify for the finals.

It was Nadine Capellmann who won the finals in Frankfurt with her Holsteiner gelding Cockney. Sired by Caretino I out of a Corso daughter, Cockney was born in 1991 and first came into the spotlight at the 1997 German Championships for Young Dressage Horses. Under owner and rider Nadine Capellmann, Cockney won the 6 year old division with a notable score of 9.3, leaving the 1997 World Champion of the 6 year olds, Renomee (by Rubinstein I) behind him. Cockney is yet another champion horse owned by Capellmann of whom can be said that she's currently managing the dressage stable filled with the most talented prospects in the world.

The first three placed combinations in the Burgpokal finals in Frankfurt were selected to ride the "Siegerpreis", in which they had to to show a PSG freestyle test. Cockney was yet again the best in this kur, leaving Nicole Uphoff with Friedensfurst and Klaus Husenbeth with Piccolino behind him. Judge Christoph Hess decribed Capellmann's test as "a Dressage Fascination."