Eiger I, Hanoverian Stallion of the Year 1999, Passed Away 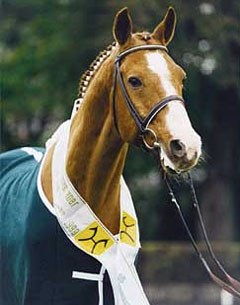 Eiger I was awarded the title Hanoverian Stallion of the Year 1999 in Verden. He succeeds to other great sires of the Hanoverian breed like Werther (1992), Gralsritter (1993), Argentan (1994),

Espri (1995), World Cup I (1996), Don Juan (1997), and Weltmeyer (1998) who were awarded this prestigious title in the past years. Beside a precious bronze sculpture Eiger`s breeder received a check of 20,000 DM donated by the Uelzener Insurance Company.

Eiger was born in 1975 at Hans-Wilhelm Oltmann`s at Drochtersen. His father Eisenherz was a sought after sire of dressage horses at that time. The sire of Eiger`s dam, Abermals adds the famous Tempelhüter blood to his pedigree. The chestnut stallion grew up at the stallion rearing farm Hunndesrück and passed his performance test at Adelheidsdorf in 1978. With above average results in both dressage and jumping he proved his versatility and reached fourth place with a total result of 113.66 points. Among his competitors were the stallions Großfürst (winner of the performance test), Bolero, Pik Bube II, and Don Juan. After being licensed he was awarded the title „Best stallion of his age-group". Beedenbostel (1979 – 1992), Celle (1993 – 1996), and Mandelsloh have been his breeding stations so far. He passes on his type, his correct conformation and his very good rideability to his offspring. Very often they are talented for both jumping and dressage, just like their father is. Empire, ridden by Dr. Martina Fincke has won over 85,000 DM in dressage on Grand Prix level. His most famous sons, team world champion Esprit FRH (ridden by Lars Nieberg) and Easy Jumper who, ridden by Jos Lansink is also highly successful on international level make Eiger one of the most important sires of jumping horses in Hanover. But his virtues are appreciated in other equestrian disciplines as well: Ute Volmer and Elliot by Eiger belong to the most successful combinations in western riding in Germany.

Eiger produced 35 State`s premium mares and seven licensed stallions, among them Espri, who became Hanoverian Stallion of the Year four years ago. They gave new impetus to the Hanoverian E/A line which traces back to the Thoroughbred stallion Adeptus xx who was born in 1884. 19 offspring of Eiger were sold at the Verden elite auctions and he sired the dams of a number of top horses. For instance the stallion Wilberforce by Warkant who sold for sensational 400,000 DM is out of a dam by Eiger just as Wanessa by Warkant who became Bundeschampion in 1991 or Windsor Queen, dam of the present Bundeschampion Londonderry.

Eiger I passed away 24 days after his homage.