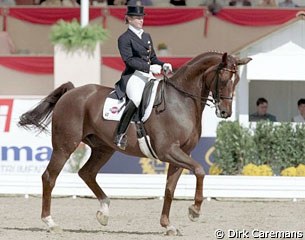 After a rest of five months, double Olympic Champion Nissan Gigolo's is ready for a come back. The Hanoverian gelding by Graditz has been entered for the CDI Stuttgart, which takes place from 17th to 21st November 1999.

Gigolo, who has won a grand total of 800,000 Deutsch marks, is the most profitable dressage horse ever. Rider Isabell Werth suffered a tough 1999 as her reserve Grand Prix mount Nobilis Amaretto died in the beginning of the year and her number one horse Gigolo pulled a tendon at the CHIO Aachen mid June.

Image of Isabell Werth and Gigolo copyrighted by Dirk Caremans