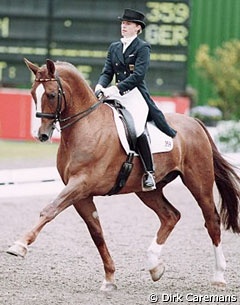 It was pretty much on the cards that the battle for the women's division would rest between Isabell, Ulla, Simone and Nadine.  Ulla and Rusty were the first combination to wade forth into battle and  they did not disappoint.

His passage-piaffe-passage tour is a bit stronger, but the piaffe needs to be more on the spot with a tad more energy coming from behind.  The only slight flaw in the test was a spook at the camera man at "F."  This test earned them 1811 pts (72.4%).

Isabell and Anthony were next, fresh from his outstanding winter season on the World Cup circuit.  The first indication that this was going to be hard work for Isabell emerged when Anthony violently shied at "S" where a camera man was standing.  Isabell shot him a look that would have felled a mighty oak at 50 paces, but she immediately had Anthony under control.  In the first passage-piaffe-passage tour, Anthony bucked and kicked out and in the 1 x tempis he flubbed two changes.  Not his best test to date, but Isabell was in good spirits and admitted they had both been a little bit off the bit in that test where the judges awarded them 1794 pts (71.8%)

Simone and Chacomo were in top form and this horse is truly expressive in all three gaits; however, he has a tendency to sit so much in the piaffe that he loses rhythm and normally the first piri sees him spinning and only getting in 5 steps rather than the 6-8 specified.
But he makes up for any lost ground in what has to be the most expressive changes ever seen to date in dressage.  This test gained them 1831 pts (73.2%).

Nadine and Gracioso put in a very good technical test with a very good passage-piaffe-passage tour where his piaffe is truly stationary without losing any rhythm  This technical test earned them the high score of the day at 1868 pts (74.7%).

The following day in the GPS, Isabell had Anthony on very good form without trouble in the piaffe. However, it seems that the changes are becoming his Achilles' heel, as he has a habit to lock his jaw against her, with two flubbed changes in the 2x, but with glacial coolness oozing from Isabell she had him on line for well executed 1x times. This test earned them 1618 pts (75.2%).

Chacomo looked set to take high earnings again today, but again his piris just drop him in points as the first tends to spin and even though the second slows down and keeps the canter rhythm, they are still only getting 5 turns in.  The judges awarded them with 1646 pts (76.5%) and they were pipped by Gracioso who earned 1667 pts (77.5%).

In the title deciding Kur, Anthony could only tickle 78.3% and that left him in overall fourth place.  Ulla has revamped her Kur to a higher degree in technical difficulty whilst keeping the same, powerful music.  Rusty was on super form with only a slight hiccup from passage into canter.  What impresses so much about this pair is that the contained power of the horse is very evident, but the rider  never has to pull or push.  They earned 79.2% and third place.

Alex and Chacomo were determined to pull out all the stops with super passages, tremendous extended trot, one of the best extended walks I  have ever seen; first double piri spun a bit, but she had him well anchored in the second set of double piris, the beat of "Africa" could not be better suited to show off his 1x tempis.  Only flaw came in final halt where he really trailed his right hind leg.  This was the best scoring Kur at 80.22% but overall points kept them in second place.

Gracioso broke and spooked in extended trot; passage-piaffe-passage tour very good; 2x tempis were completed but with hindquarters really swinging from side to side; piris tends to spin and flatten, but rhythm kept; flubbed the 1 x tempis and Nadine had to work to get them out.  This was the second best Kur at 79.24%, but overall score awarded Nadine her first German title.

It's hard to believe that this horse barely received a mention during the WEG in Rome, but I think Aachen CHIO will see a much different line up.  For my taste, although he is technically correct, he is too perpendicular to the ground when compared against Gigolo, Bonfire, Darling Ferro and all the rest of the star studded cast which will flock to Aachen.  But give Nadine her due, she did well and deserves our salute to a job well done.